The Laser Age in the Vietnam War

Posted on January 15, 2014 by understandingempire

The North Vietnamese Army launched a full-scale attack against the South in the spring of 1972. The Nixon administration responded with a new wave of air attacks north of the 17th Parallel for the first time since Lyndon Johnson stopped Rolling Thunder five years earlier. The program was called Linebacker (Linebacker II would come later in December), and it loosened the restrictions on what counted as a military target. The Air Force and Navy bombed Hanoi’s industrial and logistical infrastructure, particularly its petroleum system. There were “very few legitimate military targets in North Vietnam that are still politically off limits.”[i] This included seeding the ocean with mines to shut down Hanoi’s port facilities. According to one Pentagon official, “Under Lyndon Johnson, the Joint Chiefs were permitted to go up the ladder, rung by rung, slowly. Now we have escalated up the ladder almost overnight. We’re hitting all the targets that support the enemy’s offensive in the south and we don’t dribble it out piecemeal.”[ii]

Although politics certainly played its part in Linebacker (Nixon wanted to be seen as communicating a “total war” message), the “surgical” precision of a new class of “smart” bombs enabled this aggressive program. There are two types of “smart” bombs: laser-guided and television-guided bombs, both of which were responsible for a “new tactical ballgame,”[iii] as one army Colonel described their advent.  How do they work? For laser-guided munitions, a concentrated beam of light is directed towards a target (often by a separate “spotter plane”). This process is known as target designation. A bomb is then released, and its onboard computer processes incoming location data and adjusts the steering vanes on its tail accordingly—a step known as “terminal homing” or “guidance.” Terminal homing was widely praised for its suitability for use in densely populated cities. Often, the smart bombs used were modified World War II bombs that weighed 500, 2,000, or 3,000 pounds. “Special kits have been devised containing the guide vanes, and either the laser sensing or TV Devices.”[iv]

On July 23rd, 1972, three months after the bombing began in the north on April 6, 1972, laser-guided bombs were used to target Hanoi warehouses, facilities, and other supply depots raising claims that civilians were inevitably killed in the strikes). The Laser Age had begun. One of the most widely reported uses of smart bombs came with the destruction of North Vietnamese bridges. During Operation Rolling Thunder, Air Force planes had been unable to hit these crossings with “dumb” bombs. And so, when Than Hoa Bridge and Longbien Bridge were knocked out by smart bombs, the feeling of “revolution” had come to pass. Than Hoa Bridge was destroyed by a 3,000-pound laser-guided bomb dropped by an F-4 Phantom jet, and Longbien Bridge (previously known as Paul Doumer Bridge), was blown up by a 2,000-pound TV-guided bomb.  So impressed with the laser-guided bombs, one Pentagon official claimed: “We are knocking out more targets in a day than we probably did in a week of heavy bombing in 1967.”[v] This was to be dawn of “a new philosophy” enabled by the growing “electronic environment.”[vi] The precision of laser-guided technologies made good “common sense” for the military, “Smart weapons are thus enormously attractive from the political and psychological viewpoint.”[vii]

At the time, many predicted the laser would become a doomsday weapon—a “death ray”, or as the army calls it, “an instantaneous destruction beam”—set to revolutionize warfare.[viii] As The New York Times reported, smart bombs will “fulfill the age-old military dream for a weapon so precise that one shot will destroy a target.”[ix] The Defense Department was convinced that converting a gravity bomb into a guide bomb was a technological revolution as big as the tank in in World War I.[x] Although the Norden bombsight in World War II increased the accuracy of dropped munitions, bombing had more-or-less remained the same art for the previous 50 years: a “shotgun” approach to accuracy that relied on mass and coverage. The measure of an accuracy of a bomb, known as its CEP or “circular area of probability”, went from hundreds of feet to tens of feet or less. According to the Department of Defense, the Air Force’s use of laser-guided systems would explode, because of the benefits of “fewer bombs, fewer airplanes, lower collateral damage, and increased pinpoint destruction accuracy.”[xi]

Natural light escapes in all directions. A laser is a beam of highly concentrated light—and stands for “Light Amplification by Stimulated Emission of Radiation.” Every object on the planet has a unique “signature”: a truck, for example, gives off a unique heat and electromagnetic pattern. Sensors that can detect this signature can therefore isolate its location from the surrounding environment. By creating an artificial signature, a target can be designated anywhere, anytime—regardless of the strength of its own electromagnetic field. Lasers are able to “paint” a target and create this artificial signature, which can in turn be identified by a remote sensor platform. For its proponents, this laser-induced link—between target and sensor—would come to “revolutionize” airpower in a way that exceeded the Norden bombsight. Certainly, the laser would be at the beating heart of the “revolution in military affairs” closely (and wrongly) associated with the 1990s.

Laser developments first began in the 1950s when the idea of focused electromagnetic radiation took hold. The first U.S. patents emerged in 1960s, at the same time the Soviet Union was developing laser technology. A lot of secrecy surrounded early trials to “weaponize” the laser within the U.S. scientific community, which was racing by gains made by Soviet scientists.  Much of the early laser testing and experimentation took place at the U.S. Army Missile Command at Redstone Arsenal, under the imagination of David J. Salonimer. Beginning in 1961, Redstone began to think a laser could do just that job.[xii] By 1964, Redstone was working on a portable illuminator—with the goal of constructing a designator that was less than 40 pounds, so it could be used by the army. “In short, as 1965—the year of initial major commitment of American combat forces in Vietnam—began, the technology needed to make a laser-guided weapon was well in hand.”[xiii] Yet not all in the military services were awed by the technology. Alexander Flax, a former assistant secretary of the Air Force, revealed that laser-guided bombs were ready by 1967, with a capacity to built 100 units a month, but “we couldn’t find any takers.”[xiv] The U.S. military would have to wait for a change in administrations before the laser-guided bombs could be “combat-tested.” 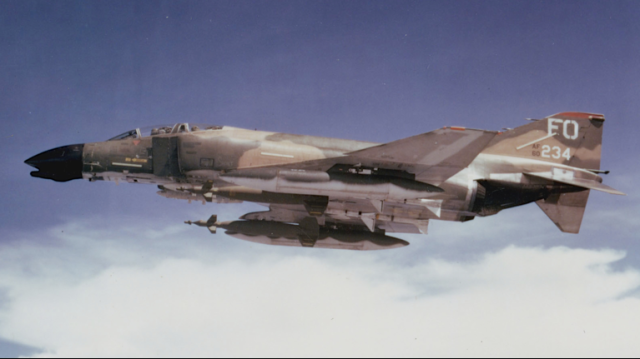 Paveway, Pave, or PAVE, was the Air Force’s umbrella term for laser-guided munitions and precision avionic systems. Under its auspices, and in concert with Redstone, Texas Instruments of Dallas first started developing laser-guided bombs in the mid-1960s. The Pave Knife was a laser target designator developed for the F-4 Phantom aircraft in 1968. By 1971, $6.3 billion was being spent on “advanced laser weaponry”[xv] Two years later in May of 1973, the Philco-Ford Corporation developed a laser designator that could be attached to a Ryan BGM-34B Firebee drone, with the aim of creating a “strike drone.” The Department of Defense’s ARPA also began developing “mini-RPVs” that could act as flying designator vehicles, such as the Praeire and (night) Calere systems. The Praeire incorporates the basic functions of the Pave Knife laser designation; only it is affixed to a drone. “Field tests of the mini-RPVs were in initiated…in the summer of 1973. Results were dramatic and tended to take the following pattern: the Praeire RPV orbited the target and provided designation for an F-4 Phantom carrying laser-guided bombs.”[xvi] There was an increase in spending on laser weapons by the end of the Vietnam War. Congress allocated a total of $840 million to missile technology in 1972.[xvii] As the years marched on, their size and costs fell: with smaller, more mobile designators and rangefinders developed.

The other type of “smart” bomb was the television, or TV-guided bomb. Both were used in the Linebacker programs. A television-guided system cost about $18,000, compared to $3,000 for the laser.[xviii] This TV-bomb contained a sensor in its nose that broadcasts visual data to a pilot’s cockpit display. The pilot then manipulates the camera until it “locks” on to the desired target. At this point the bomb is dropped, with no further guidance required—“fire and forget.” While the laser-guided bomb can be affected by bad weather, the early TV-guided bombs were also hampered by their requirement for a high-degree of black-and-white contrast for the locking mechanism to function. A popular TV-guided bomb was Rockwell’s HOBOS, or Homing Bomb System, which was a type of “smart bomb kit” that could transform regular bombs into smart bombs. The HOBOS could also be used in conjunction with Rockwell’s CONDOR missile, which was self-propelled, and an example of what Rockwell called “ready, fire, aim.” In July 1972, the U.S. Navy used a one-ton video bomb called a “Fat Albert” from the aircraft carrier Kitty Hawk.[xix] And yet these were just the beginning—model T versions. As one newspaper quipped, “In fact, the ‘smart bombs’ now in use are about sixth graders compared with the Ph.D. bombs either on the drawing board or already being tested.”[xx]

But despite all the pats on the back, the self-congratulations, the “strategic” bombing was never a success. Bomb after bomb failed to put a dent in the will of the North Vietnamese. Why? This is a question that Stillman explored at the time. He argued that “north of the 17th Parallel there is simply north that much to burn or to blow up. North Vietnam is not an industrial agglomeration like Hitler’s Germany or Tojo’s Japan.[xxi]” As he continues, “the United States is up against the classic dilemma of the developed power (I would like to say “civilized” power, but somehow the word will not come) fighting against the underdeveloped barbarians;”[xxii] one that reaches back to Roman Emperor Hadrian “harrying the wild Picts and Scots beyond the northern wall and finding only wretched straw huts to burn, as that of the British army in Indian in the days of the Raj lunging against the Pathans and Afghans of the northwest frontier hills.”[xxiii]

If Rolling Thunder mobilized mass, and Linebacker mobilized precision, both operations failed to understand that bombs could never extinguish the workings of a highly dispersed, networked society. We tend to think of the Internet-age as the age of the network society, but the North Vietnamese displayed incredible versatility, adaptability, and connection in the face of aerial onslaught. Carpet-bombing and laser-bombing both produced much in the way of hubris, but little in the terms of a discernible “victory.”

One strategy to avoid the boom of the B-52 and the bite of the Phantom was simply to dig a tunnel. It was an immensely effective tactic.

Nonetheless, lasers would emerge from Vietnam unscathed, and would go on to define warfighting in the late 20th century.