Posted on February 21, 2013 by understandingempire

The “militarization” and “manipulation” of nature (notwithstanding the impossibility of a thing called “Nature”) – is a feature as old as the military itself, and includes a variety of sites, bodies and geographies.

In a distressing but fascinating excerpt from the upcoming 2013 book “Frankenstein’s Cat”, Emily Anthes writes on biotech’s future creations and “monsters”. One such case study is a “hacked” beetle (I find the idea of “hacking” organisms quite repulsive, but find the notion quite compelling as a concept that captures our contemporary manipulation of life). 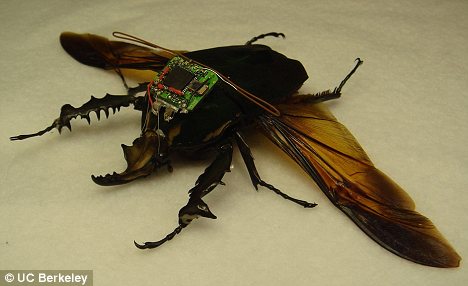 Back in 2006 the US Defense Advanced Research Projects Agency (DARPA) asked America’s scientists to submit “innovative proposals to develop technology to create insect-cyborgs”.

Such a request is linked to the U.S. military’s desire for “micro air vehicles” – insect-inspired miniature planes that can be used for surveillance and act cooperatively in “swarms”.

Consider the synthetic drones that engineers have managed to create: the DelFly Micro, which measures no more than 10cm but can only stay airborne for just three minutes.DARPA officials knew there had to be something better out there, and turned to “nature” for inspiration.

And the same DARPA officials realized they could begin with live insects, rather than starting from scratch. All they would need to know is how to “hack” into insects’ bodies to manipulate them.

Darpa’s call for insect cyborgs piqued the interest of Michel Maharbiz, an electrical engineer at the University of California, Berkeley. He figured that most scientists taking on Darpa’s challenge would work with flies or moths, longtime laboratory superstars, but Maharbiz came to believe that beetles were a better bet. Compared with flies and moths, beetles are sturdy animals, encased in hard shells, and many species are large enough to carry significant cargo. The downside: scientists didn’t know much about the specific nerve pathways and brain circuits involved in beetle flight.

That meant that the first challenge was to unravel the insects’ biology. Maharbiz and his team began working with several different beetle species and eventually settled on Mecynorrhina torquata, or the flower beetle. It is a scary-looking bug – more than 5cm long, with fearsome claws and a rhinoceros-like horn on the forehead in males. The flower beetle’s transformation began with a quick trip to the freezer. In the icy air, the beetle’s body temperature dropped, anaesthetising the insect. Then Maharbiz and his students removed the bug from the icebox and they poked a needle through the exoskeleton, making small holes directly over the brain and the base of the optic lobes, and threaded a thin steel wire into each hole. They made another set of holes over the basalar muscles, which modulate wing thrust and are located on either side of the beetle’s body. The researchers pushed a wire into the right basalar muscle.

Stimulating it would cause the beetle’s right wing to start beating with more power, making the insect veer left. They put another wire into the left basalar muscle; they would use it to steer the beetle to the right. The loose ends of all these wires snaked out of their respective holes and plugged into a package of electronics mounted with beeswax on the beetle’s back. This “backpack” included all the equipment Maharbiz needed to wirelessly send signals to the beetle’s brain: a miniature radio receiver, a custom-built circuit board and a battery.

And just to round things off:

In 2009, Gage and Marzullo established Backyard Brains, a company that sells low-cost kits that will turn any interested amateur into a neuroscientist, if only for a day or two. Their first product was a little contraption known as the SpikerBox. On sale for $99.99 (£65), the device lets customers observe neural firing in a cockroach in real time. (A set of three roaches is $12 extra.) The procedure is simple: just insert two needle-like electrodes into a cockroach’s leg, and the SpikerBox will do the rest, amplifying the electrical activity of the insect’s neurons and transmitting it to an attached computer or smartphone as that characteristic visual pattern of peaks and valleys. For their second product, Gage and Marzullo decided to push the boundaries further, to venture beyond brain observation and into brain control. Taking inspiration from the world of cyborg animals, they created a kit that provides their customers with all the tools they need to take over the nervous system of a living cockroach. In principle, the Backyard Brains RoboRoach is nearly indistinguishable from the beetles Maharbiz is making in a university lab – and that is precisely what is so remarkable about it. It means we can all experiment with bionic bugs in our own homes.

Like Loading...
This entry was posted in Biopolitics, Drone Technology and tagged beetle, Cockroach, Drones, nature, science. Bookmark the permalink.