Supersizing the Drone War in Afghanistan

Posted on December 11, 2012 by understandingempire

Coverage of America’s drone wars is usually focused on the Predator strikes in Pakistan’s tribal areas. And for good reason too: they represent the end-points of a post-9/11 paramilitarized CIA.

But 2012 was the year of the drone in Afghanistan. Never before have their been so many Hellfire attacks.

There were 447 drone strikes in the country during 2012, representing 11.5 percent of all air-strikes  up 5 percent on last year. 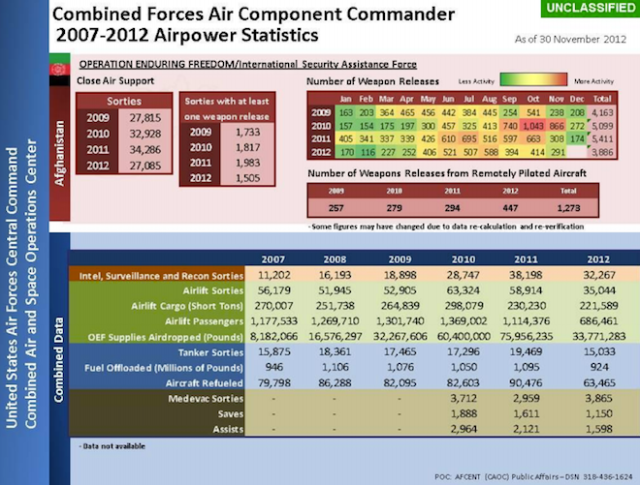 Picking through the numbers, a trend comes to light. Part of the reason that drone strikes represent a larger fraction of all strikes is the decrease in the number of “manned” sorties and weapon releases.

This suggests that post-2014 in Afghanistan, “As the humans leave, the robots take up the slack“.  Indeed, counter-terrorism will have a renewed centrality, as Special Operations and drones constitute the X and Y axes of Washington’s “disposition matrix”.

2 Responses to Supersizing the Drone War in Afghanistan